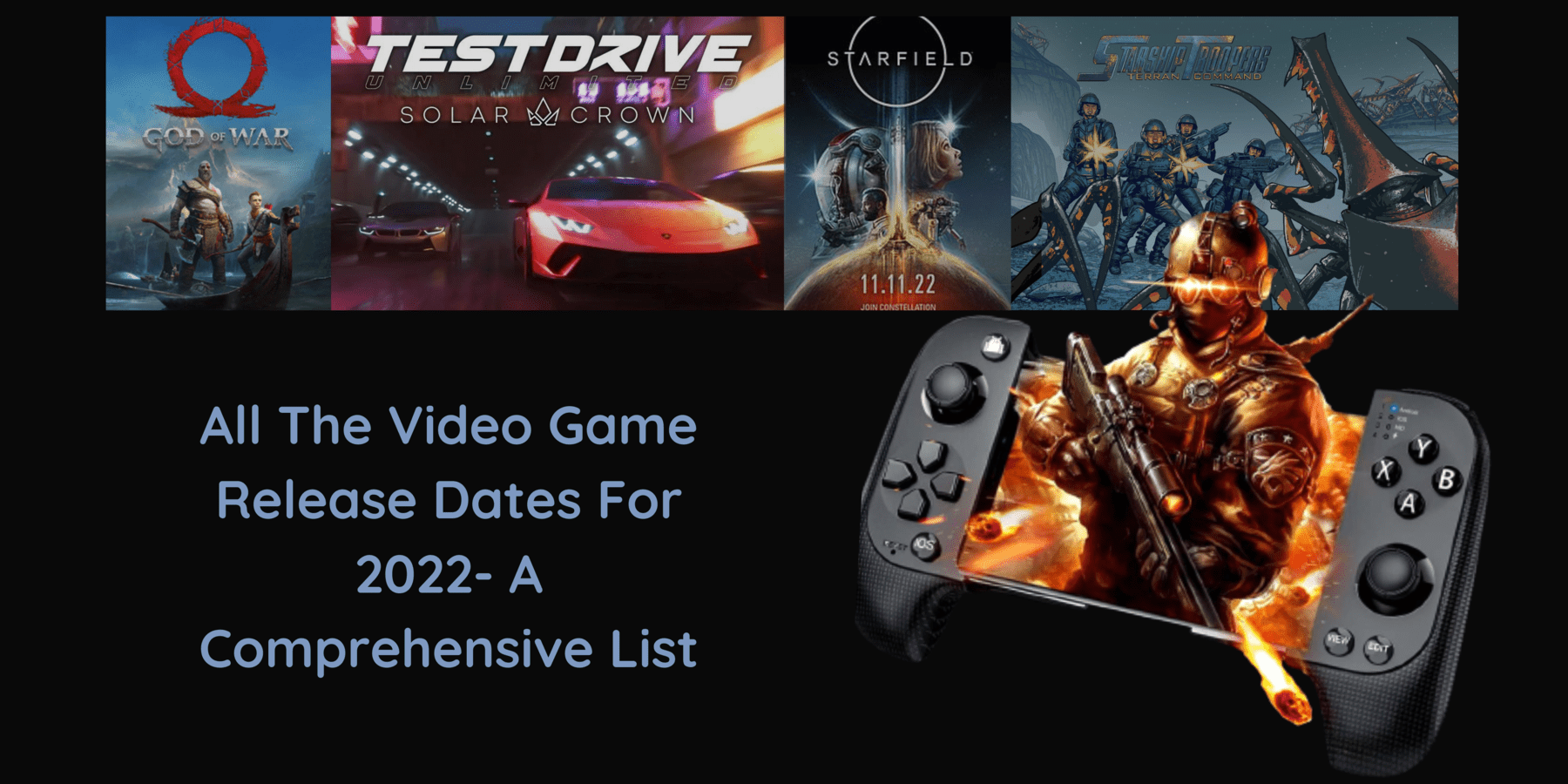 All The Video Game Release Dates For 2022- A Comprehensive List

Video games have been known to have major impacts on the gamers daily lives. It provides a means of escape and a tool for creativity. The impact of video games can be seen in the form of the rise in new fields of studies such as video game design and business.

Video games have been said to teach us the value of hard work. Hard work is said to increase the amount of success you’ll have. On average, there is a video game available for almost every age group. The team at Techy Mau Game Studios not only design games but also enthusiastically play games on all platforms. The team is always excited to experience the thrill of newly released games on any platform.

Let’s have a look at the awaiting video games that will be released in the year 2022.

This action-adventure game was developed by Santa Monica Studio. It was published and released worldwide by “Sony Interactive Entertainment.” The game was initially published and released for Playstation 4 on April 20, 2018 and its Microsoft Windows version is set to release on January 4, 2022. This is the eighth version of the God of War series and inspired by Norse Mythology. Kratos, the former Greek God of War is the only playable character, and his young son, Atreus are the only two protagonists in the game. This is for the first time in this gaming series that there are two protagonists.

The game is developed  by Techy Mau Game Studios and is scheduled to be published in the year 2022. This endless runner game denotes the survival of life, and obstructing meteors denoting the limits of life. The character- Little DODO, endlessly runs through different paths like Forest Path, Lava Path, Ice Path, and Ridge Path, dodging the falling meteors and thus bettering the score. The concept that Techy Mau Game Studios relates to this game has come from the concept of growth in our lives since childhood, dealing with endless doubts about maths, science, etc. During teens, we become a part of the endless competition of “Being the Popular” while, in adulthood, we all face an endless struggle in our workplace.

This upcoming racing game developed by KT racing and published by Nacon is set to be released for Xbox Series X/S, Xbox One, Microsoft Windows, PlayStation 4, PlayStation 5, Nintendo Switch, and on 22 September 2022. The game will feature vehicles from Bugatti, Dodge, Ferrari, Koenigsegg, Lamborghini and Porsche on the Hong Kong Island. It will be the 21st version of the Test Drive Series and the road will be left-hand traffic being the first ever of this road type in the series.

This upcoming action role-playing video game is developed by Bethesda Game Studios and published by Bethesda Softworks. In this next generation role-playing game, the player can customise his character to explore the epic journey of the constellation with freedom to answer humanity’s greatest mystery as described by Bethesda Game Studios. The area of the game extends outward from the Solar System for approximately 50 light years called The Settled Systems. This game can be played in either first- or third-person perspectives.

This upcoming game is a real time strategy video game developed by The Aristocrats and published by Slitherine. The game is focused on military actions and the players will control Mobile Infantry troops in planetary campaigns against the Arachnids. The major task is to tactically manage the resources. The player can choose upgrades for their forces, and develop weapons such as Marauders, and power armor suits. The game features line-of-fire mechanics and true line-of-sight, meaning that the topography and elevation of the battlefield will be a tactical factor in the game.

We have prepared a comprehensive list of video games that are set to release in the year 2022. We are waiting and excited to play these games with our team at Techy Mau Game Studios. There are games like; Demon Throttle, EA Sports PGA Tour, eFootball 2022 and many more that are scheduled to be released in the year 2022 but the publisher has not announced the release date as yet. We hope these games get released soon so we can enjoy playing these games as well. Meanwhile Techy Mau Game Studios have published games- The Howitzer, The Little Guardian, Reformed, Ball Tube, Pounce for all the mobile gaming enthusiasts so you can enjoy the ultimate gaming experience on your mobile devices. We are also working on developing more games of different genres and releasing some of them in the upcoming year.

I confirm. I join told all above. We can communicate on this theme. https://thetranny.com/videos/56994/sissy-poppers-suit-up/

Many thanks how I can thank you?

I consider, that you are mistaken. I suggest it to discuss. Write to me in PM, we will communicate.

Rather the helpful information

Register and enjoy for free: https://2track.info/FcNn

As Real As You Want it To be. Fill out this short survey and we'll give you a chance to win an iPhone 13 Pro. Visit http://bonusplus.click

In it something is. Thanks for an explanation. I did not know it. https://gay0day.com/videos/177738/pbb-connect-crismar-naka-pag-jakol-na-pinoy-jakol-daming-tamod/ https://zeenite.com/videos/86260/hindi-sex-movie-with-indian-actress-with-hindi-audio/

I think, that you are not right. I suggest it to discuss. https://sexetel.net https://analacrobats.info

You are not right. I am assured. I can prove it. Write to me in PM, we will discuss. https://lcorp.org https://amercanporno.info